Today, in spite of doomsday prophecies particularly by the western world, Nigeria stands as one people, reportedly jubilating wildly at the turnout of the presidential election. I’m apolitical but I love this great country. There are Lots of lessons for all this season. 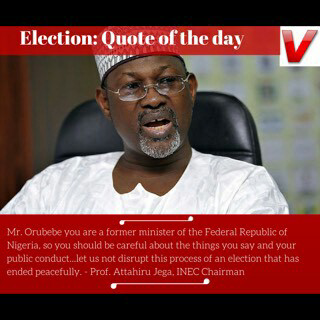 I’m totally ‘Jega-ed’ right now.  This is the country that we sing of in our national anthem and recite in the pledge. Our compatriot, JEGA so impressed the country that his name got a new Meaning: JEGA – to be inexplicably chilled/relaxed and untold refusal to be overwhelmed in the midst of stupidity or antagonism or conflict. Usage: A Soldier slapped me, but I just Jega’ed. Lol

There are loads of comments on social media, so I’ll be reviewing a few plus mine for your reading pleasure.

One of my friends, after making Jega his middle name remarked that is like the lucky thief who died beside Jesus. That last moment cleaned all his years of mess. Now an Elder statesman, Jonathan, had shown gentility, a graceful personality and a great leader (leaders are known in times of crisis and how they manage situations). I wish his party compatriots would just let things be and save themselves funds to be expended on needless petitions.

In the Buhari, we’ve seen unparalleled focus even in the face of insults, abuses, rejection and provocation), consistency, not accepting defeat (after three failures).

In Orubebe, we’ve seen what a good man, from a good home should not be. I wonder how his children feel right now. Who knows, he may do well in Bollywood with Mr. Ibu, Osuofia and co.

In Jega, we’ve seen a crisis manager per excellence, cool, calm, organize and detailed.
Hilariously, some mischievous persons have coined drugs from their names.

Check at your nearest pharmacy:
Jegamycin: a drug used for calming nerves and remaining focused even in the face of unnecessary provocation. 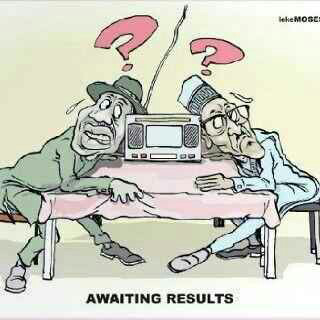 Beware of this next drug, NAFDAC has tried to curb its circulation in the drug market!
Orubebevin: a drug/elixir used to activate adrenalin glands that makes one shamelessly misbehave in public. Mostly used by touts, okada riders and ex militants. Keep away from children. Lol

In some Nigerian Christians, we’ve seen Christians who believe more in human prophets than CHRIST and they are disappointed. We’ve seen overzealous church leaders who went openly partisan and divisive, forgetting that congregations have different political leanings. One of my fathers in the faith was particularly disturbed and questioned GEJ’s Christian when during campaigns he went as far seeking the support of traditionalists aka babalawo’s.

In Femi Fani Kayode, Okupe, Asari and Fayose, we’ve seen typical Nigerian politicians, talking from the two sides of the mouth. I am happy Jonathan lost, not that I hate him, but if he had won, Witches and Wizards, Guru, and our self-styled prophets would have claimed glory that belonged to God. I hope he learns to TRUST GOD ALONE in future, not trying ‘all ways’, God is a jealous God.

To the Christians who believe Buhari will turn them to Muslims, I am not one of you, my own JESUS is no more in the grave, He’s alive and in charge of Nigeria.
Any President who tries that in Nigeria will die before he does it, this country is part of God’s end time plan.

God is omnipotent and omniscient, created all for his purpose and directs all however he wishes. So note that Buhari is not a messiah but a leader, Only JESUS never fails. He promised change but without God, he can do nothing. So lets continue to pray for the President-elect to succeed, while thanking President Jonathan for making it happen. 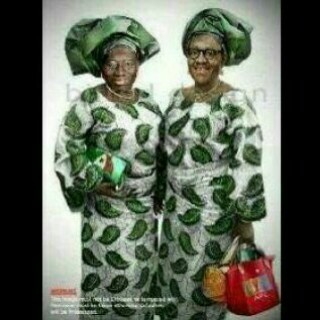 Finally, our northern Muslim brethren should learn from this, how people behave and speak in a civilized society, if your son fails an election in the future, he should be a statesman like Jonathan and not to start killing, threatening and maiming, we are not in a zoo or an abattoir. Respect human life and this great country.

Finally, a prayer for all to say, ‘O God of creation, direct our noble course. Guide our leaders right, help our youths the truth to know. In live and honesty to grow and live in just and truth. Great lofty heights attain, to build a nation where peace and justice shall reign’.