Its great to have senior friends you can have heart-to-heart chats with especially on the ‘man-issues’ (they always have issues …lol). This piece by +Peace Onyegbuna is a simple breakdown of reality, a must-read for every Single Christian person out there. Life is not a Rehearsal, take it seriously. Enjoy!!!

Once in a while I like to go shopping and at the malls, I see very interesting characters; Serious buyers who already have a set mind on what they want, head for the section, buy and leave. No drama. There are those who just want to look and get ideas while others want to compare prices or options. Yet others will pick off the shelf without paying and some still just don’t see what they want and leave probably upset.

As big Sis, I get to talk with both the young girls and the young men and quite frankly, I can’t help but say like Solomon ‘’ the way of a man and a maid remains a mystery”. Ok, let’s focus: relationship is like a person going to the market. You really must know what you want to buy, where it is sold and how much it will likely cost. If you want to buy a basket of tomatoes and you head for Shop Rite, the probability that you will get it is zero and even if you do, it will most definitely be double the price compared to going to Mile-12 market where you’d find the tomatoes in surplus quantity.

As an unmarried lady, figuratively you are in the market – actually on display and there are all kinds of customers coming to view. Some will take a look and want to read the manual, and may immediately buy or seek the opinion of other shoppers to be sure they have chosen the right stuff. For others, some goods don’t even get a second glance, while some see the goods afar of, conclude that it’s out of their reach and wish they had the resources to buy. They walk away only to eventually discover that the particular goods was affordable but unfortunately no longer on the shelf.

So the Brother hanging around you, what category of shopper is he?

Mr Eligible Shopper. He looks like the real deal but unfortunately he’s looking for something that’s only found in the movies and romance novels. Mr Eligible Shopper likes you but… When he talks with his friends, he says you have this fantastic virtue but…

For Brother Eligible Shopper you are almost but…. never it!  He wants perfection. Everything must be to his specs. In fact, if he has his way, he will sit with the council of angels and give God a description of the model, functionality and exterior of the woman he wants. Because he’s such a perfectionist, he is permanently dating one sister after another thereby causing a fight among the ladies. Why? The ladies want to measure up. The terrible part of all this is that, once Mr Eligible Shopper is around your shelf, other prospective buyers give way. Meanwhile buy, e no buy, comot for road now, wossai!!!

The Money Excuse Shopper. The other day I met an old school mate and while catching up on old times, I asked ‘’Ol boy how far, you don marry?’ And he says ‘I no get money to marry’. Then I met another friend who’s doing well financially and trust me, I asked ‘how many kids you get’. And he replied ‘I neva marry’. ‘Why now?’ I asked ‘’The girls are after my money’! Ahhhhh! So who’s fooling who? You be the judge. This kind of shopper has serious complex issues. He is either too full of himself and his money or thinks very poorly of himself. 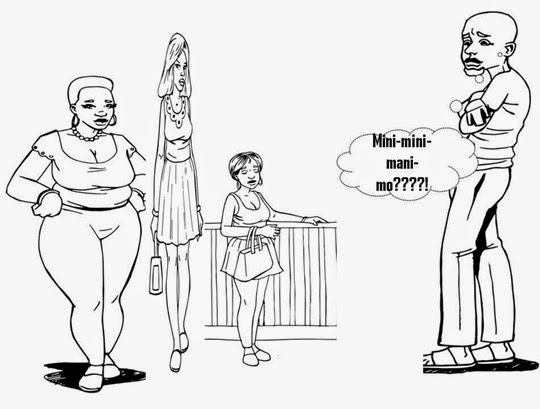 They, like my two friends above tend to jump to negative conclusions pretty fast. In fact, more often than not, they base their judgement of the ladies on past experiences.

Hey, guys, contrary to what you think, my Sisters are very reasonable, if she’s asking about where you work, it’s not because she wants to know the size of your pocket. Rather she wants to know you and what you do for a living including your goals and ambition. Surely, that’s not too much to ask? And by the way don’t be so quick in flaunting the notes in your pocket before flaunting the vision in your heart. And any girl that’s unnecessarily inquisitive about your bank account, report her to Mummy Ojukwu (Single Ladies Coordinator) fast.

‘I Almost’ Shopper. These shoppers are very bad for business. That’s because they are always around you; they are your friend and often your confidante. In fact, they know you so well and are secretly nursing the thought of marriage, but for the strangest reason, cat always gets their tongue (I bind that cat in Jesus name). On your own part, you know that somehow, somewhere, this friendship matter, don pass be careful, but hey no be woman dey toast guy. Even when you subtly give the right signal and prompting without making yourself look obvious or desperate, for where? The guy either doesn’t see or he assumes that you will always be there. And because the clock of a woman is different from that of a man, when another bro, most often from another church comes and sweeps the girl off her feet, you begin to hear the following… ‘’Ah Sista…actually….you see…I was… I nearly… I almost….”

Sample Shoppers. These shoppers want the benefit of marriage but not the commitment thereof. Even the white man who used to send samples of goods to prospective buyers has since stopped. They now ask for payment before delivery.

I-Like-it & I’m-Buying-it-Shopper: But my favourite Shopper is the man, who knows what he wants, talks to the girl, they agree and by the Godly spirit in them, head for the altar. These ones reduce our prayer meetings and turn every Saturday into a party. These are the shoppers meant for Gods Princesses. They are Kings in waiting – men of vision, mission and purpose. They are God’s boys. Often they come in sweat shirt, and work clothes, and the tendency is to brush them off but when you look into their eyes and feel their heart, they are passionate about life and God –and it takes only a God conscious girl to get the wheat from the chaff.

So ladies, I ask, the guy hanging around you, which kind of shopper is he? Is he window shopping or buying?